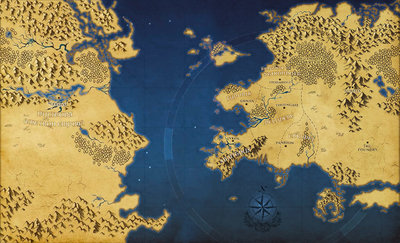 The universe of The Crown & The Flame series is set in a world with different landmasses to Earth.

The map to the right is a near-complete image of the landmasses of this alternate world. The map appears on the loading screen every time the player enters a chapter. However, not all the map is pictured. Most of the time, it will be centered upon the Five Kingdoms, the eastern landmass of the world. A notable exception to this is the first two chapters of Book 3, which is centered upon the continent of Ducitora, the western landmass.

The map displays the Five Kingdoms; Abanthus, Bellmere, Ebrimel, Fydoria, and Stormholt, as well as the Empire of Ducitora, known colloquially among the Five Kingdoms as "the Iron Empire". In addition to these major nations, smaller countries, like the Gilded City of Aurelia, and the Technocrats' Foundry, are also displayed. For a time, the map will also display the nomadic mercenaries in the grasslands east of the Five Kingdoms. From the start of Book 1 until the end of Book 2, the Five Kingdoms is shown as being under the complete control of Abanthus. This is due to various events related to the story of the series.

This world also has a unique history, albeit somewhat similar to Earth's. Should you uncover the Ducitoran Empress Azura's origins, you'll find that civilization in this world has existed for over a thousand years at the least. As well as this, it's mentioned by Gabriel Amarne that the Five Kingdoms have been having "border skirmishes" for a hundred years prior to the series, implying that the history of the Five Kingdoms stretches far back.

Eventually, an uprising led by the rightful Queen of Stormholt, Kenna Rys, causes Abanthus' hold over the Five Kingdoms to capitulate, just as King Luther is retreating from Ducitora. Before long, Kenna and Luther agree to work together to end the war with Ducitora, effectively restoring independence to the four other kingdoms under Abanthus' rule. Ducitora did invade the Five Kingdoms, but was driven out following the death of Empress Azura at Kenna's hands. Following this, the decades-long war with Ducitora ended, and Stormholt held hegemony over the Five Kingdoms thereafter.

Unclear connections to other stories

The universe where most Choices stories are set in has various connections to the world of TC&TF. The most pronounced of these are shown in The Freshman/Sophomore and The Royal Romance.

In The Freshman, The Crown & The Flame is a television show. Tyler and Abbie are superfans of the show. When Your Character visits Los Angeles in Book 3, Chapter 13, she visits a television studio where the show is filmed. She even meets the actors who play Kenna and Dom. It's referenced in The Sophomore, Book 1 that The Crown & The Flame is in its final season, a tongue-in-cheek reference to the series' conclusion. As well as these references in The Freshman, the television show is also referenced in Endless Summer as Your Character, Sean and Jake are said to be avid fans.

In The Royal Romance, the character of Olivia is said to be descended from the Nevrakis family. She even possesses the last name "Nevrakis". Furthermore, Olivia bears a comically identical resemblance to Zenobia Nevrakis. There are also said to be connections between the family of King "Liam" and Kenna. Many players also say Bastien bears a resemblance to Raydan. The setting of the series, Cordonia, could also be a modern-day Stormholt. It is revealed in The Royal Romance, Book 3 that the Five Kingdoms was once united under one crown and later became Cordonia as we know it.

Retrieved from "https://choices-stories-you-play.fandom.com/wiki/World_of_The_Crown_%26_The_Flame?oldid=318547"
Community content is available under CC-BY-SA unless otherwise noted.