The Freshman: Game of Love

February 8, 2017 - February 15, 2017
The Freshman: Game of Love is a Valentine's Day Special Book. This story takes place before the events of Chapter 4 onwards of The Freshman, Book 2.

The university is holding a Valentine's Day competition to crown the cutest couple on campus! Will you and your partner be able to work together to show your worth?

Chapter 1: May the Best Couple Win

Are you and your sweetheart the cutest couple on campus? Here's your chance to prove it!

You and your valentine have a romantic evening ahead of you! Will sparks fly or just fizzle out? 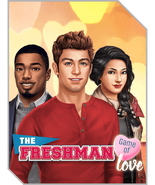 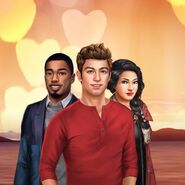 Piper from AME talking about her new show Game of Love

Click here for the walkthrough of this book: The Freshman: Game of Love Choices.

Retrieved from "https://choices-stories-you-play.fandom.com/wiki/The_Freshman:_Game_of_Love?oldid=363901"
Community content is available under CC-BY-SA unless otherwise noted.