Welcome to Hartfeld University! You'll make friends for life, maybe even find true love. Will you date bookish James, party girl Kaitlyn, football hero Chris ... or all three at once?

Welcome to Hartfeld! Will you date bookish James, party girl Kaitlyn, football hero Chris... or all three at once?

Secrets are revealed as you and your new roommates play a slightly-altered game of Truth and Dare.

Desperate to stay in school, you learn details about the last scholarship still available on campus.

With your future at Hartfeld on the line, your roommates band together to help you complete an impossible task.

As football season begins, an assignment from Professor Vasquez forces you into an awkward encounter with Chris.

Chris has fallen into the Kappa girls' clutches! Can you rescue him from a wild sorority party?

To complete Professor Vasquez's latest assignment, you'll have to rush the one sorority at Hartfeld that wants nothing to do with you...

Chapter 8: On the Hunt

The Kappa girls turn up the heat with a campus-wide scavenger hunt! Can you and your friends solve the clues in time?

Only one thing stands between you and official membership in Kappa Phi Sigma... scoring a date with James Ashton!

As the ball comes to a close, the Kappa girls' final decision draws near. Will you make the cut?

After the stress of rush week, you and your friends are ready to cut loose for Kaitlyn's birthday! Time to go clubbing!

With two love triangles, major relationship drama, and a big secret crowding the dance floor, your night out is about to become a nightmare!

After a harrowing end to an unhappy birthday, you and your friends wait in the emergency room to see Kaitlyn. Will she be okay?

When James's pompous parents come into town, you agree to pretend to be his fiancee!

Road trip! You and James head out of Hartfeld when professor Vasquez's daughter sets up a meeting to tell you the truth about her father!

With fall quarter nearly over, you and your friends prepare for an epic suite party... assuming you survive your showdown with Professor Vasquez!

One perfect night. Three potential dates. With the Hartfeld Formal mere hours away, it's time to make a choice... 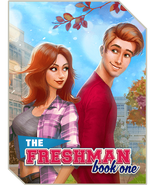 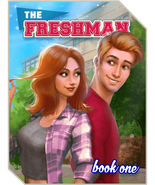 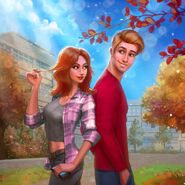 Click here for the walkthrough of this book: The Freshman, Book 1 Choices.