This page contains all the weapons used in "The Crown & The Flame" series. 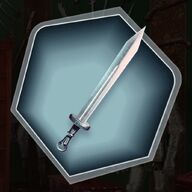 The short sword is the default sword used by Kenna. It has a medium-length, double blade with a short hilt. 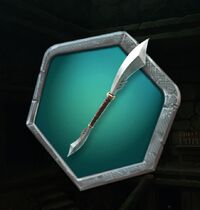 The Kor-Kitar is a double bladed staff used by the Monks of Rajkur, salvaged at the Ruins of Rajkur. It consists of a long pole with one large blade on one end and a smaller one at the other. It costs 💎 17. 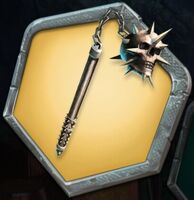 The Deadman's Flail is Val's weapon of choice. The flail, shaped like a skull with spikes, can crush armor and bones. According to Val, she lets Kenna use it once in a while. It costs 💎 20 but is free when playing as Val. 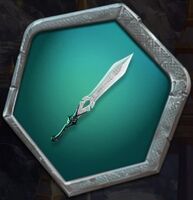 The dagger is a small double-bladed weapon owned by Kenna Rys. She may carry it as a holdout weapon following a suggestion by Val Greaves when she is forced to disarm before entering the city of Aurelia. It is small and light enough to be smuggled inside of a boot. If she has it, she stabs Marco Nevrakis across the cheek with it. It costs 💎20. 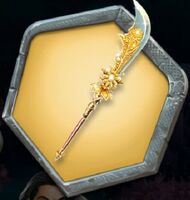 The Golden Mountain Fang is a weapon used in Aurelia. It is forged from its gold and can pierce even the hardest armor, and costs 💎 19. 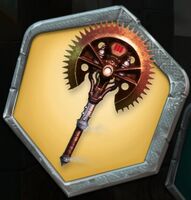 The Gear Axe is found in the Technocrat's Labryinth and can be used to fight the Mechataur. As its name implies, it's axe blade is shaped like a gear. Alternatively, it can be used for other purposes for 💎 18. 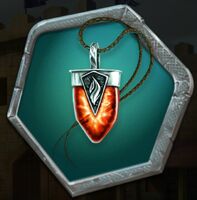 The Mysterious Amulet is given to Dom by the Rajkur Monk. It helps to harness Dom's fire magic. 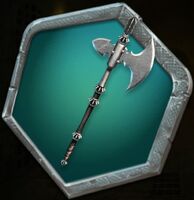 The guard's axe can be picked and used by Dom to fight against Bartel. It is an alternative to using the Mysterious Amulet. 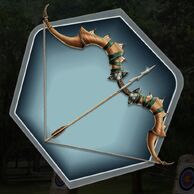 This is a longbow made of Heart Oak of Thorngate. It is quite difficult to wield as it is adorned with thorns. It was Rowan's weapon of choice until Kenna kept it. It costs 💎 12. 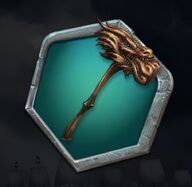 Kailani made this weapon from the Heart Oak of Thorngate. It is a war hammer sculpted to form a dragon's head spitting out fire. It can be used to crush armor for 💎 17 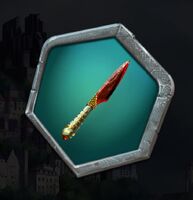 Adder's Fang is a red and gold dagger dipped in venom that is used by The Adder of Lykos. Even a scratch from this dagger can lead to certain death. Kenna can have one of these for 💎 17. 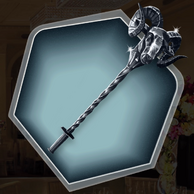 The Ram's Head Mace is a mace with a ram's head and horns given to Leon Stirling by Adriana Rys. It is hard enough to crush armor, and its horns can be used to hook opponents in. Kenna can retrieve this for 💎 16. 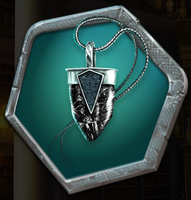 This is an amulet, found in one of the books from the Great Library of Ennan, that can shield the wearer from magical attacks once. It costs 💎 19. 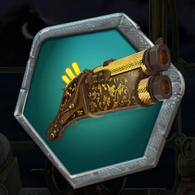 This pistol created by Whitlock emits short, concussive bursts of energy which can stun or kill the enemy, depending on the user's choice. It costs 💎 17.

This is an ornate dagger wielded by the Black Asps agents. It is small enough to be hidden within the sleeve. Raydan can ask for one for 💎 19. 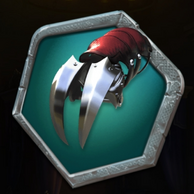 This is one of the iron claws used by Azura's assassins. It has two claws and can be worn as a glove. It costs 💎 16.

Retrieved from "https://choices-stories-you-play.fandom.com/wiki/The_Crown_%26_The_Flame_Weapons?oldid=302047"
Community content is available under CC-BY-SA unless otherwise noted.