This place. It's my home. My heart. My soul.

Stormholt is a location in The Crown & The Flame series. It is the home of the Rys Family, and the seat of the Kingdom of Stormholt, the smallest of The Five Kingdoms. It is a classic medieval kingdom, ruled from a feudal castle known for its thick, nigh-impenetrable walls.

Stormholt is first seen when Kenna Rys and Dominic are sparring outside the castle. Before Luther Nevrakis conquered the castle, the ruler of Stormholt was Queen Adriana Rys, but she was murdered by Nevrakis soldiers upon Luther's order.

The Nevrakis Family ruled the Kingdom of Stormholt and lived in the castle for the next two years. After those years, Luther set sail to attack the Iron Empire, ultimately beginning the series of events that would eventually lead to his own defeat. Before he left, King Luther named his son, Prince Marco, his regent, leaving him to rule Stormholt while he was away.

However, Marco ruled Stormholt for only a short time. Equipped with powerful weapons and Technocrat machinery, Kenna returned to Stormholt with an army of mercenaries, monks, and Aurelian, Fydorian, and former Stormholt soldiers to reclaim her home. Some citizens of Stormholt, hearing that their queen was alive and had returned to take back her kingdom, also fought with Kenna's army.

Kenna's attack was a complete success, as she managed to defeat Marco and his army, take back her kingdom, and establish herself as the true ruler of Stormholt.

Stormholt Castle, known for its nigh impenetrable walls, was used as a stronghold during the Five Kingdom's clash against Empress Azura.

Courtyard
Add a photo to this gallery 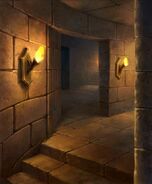 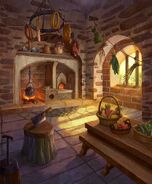 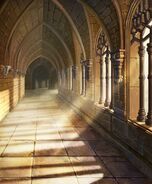 Corridors of the Castle

Dungeon
Add a photo to this gallery

Retrieved from "https://choices-stories-you-play.fandom.com/wiki/Stormholt?oldid=367291"
Community content is available under CC-BY-SA unless otherwise noted.