Choices: Stories You Play Wiki
Register
Don't have an account?
Sign In
Advertisement
in: Characters, Female, 'The Royal Romance' Characters,
and 8 more

The Royal Romance
The Royal Heir

I'm a Nevrakis. We're not known for 'safe'. We're known for crushing our enemies.

As she bears an identical resemblance to her ancestor, Zenobia Nevrakis, Olivia has red hair in an updo, green eyes and fair skin. She usually wears a black sequined gown.

Olivia is witty but crass, drawing amusement from bluntly putting down other people. Nevertheless, she does appear to have a "nice side" to her, as she is friendly with King "Liam". Olivia's cold personality is potentially the result of the trauma she endured in her childhood; her parents were killed while attempting a coup against the Crown but she had been told that they had been assassinated for political reasons. She doesn't find out the truth until The Royal Romance, Book 1, Chapter 19.

In The Royal Heir, she says she loves Lythikos, most forms of hand-to-hand combat, and stilettos (both the blades and the heels).

Olivia and Prince (now King) Liam are childhood friends who grew up together at the Royal Palace. When he and the Royal family had visited Lythikos, he convinced his family to bring her back with them since she was all alone. For months, she would not leave his side (to Drake's annoyance). In Book 1, she is one of the top three suitors for Prince Liam and honestly loves him. In her dreams, she and Liam ride through the fields crushing their enemies like horsemen of the apocalypse. If you do not choose Liam as your fiance and later husband in Book 3, he asks her to dance at your bachelorette party in Chapter 16 and at the ball after the Guardians and Champion of the Realm ceremony in Chapter 22. She also says that he invited her to dinner after the ceremony to finalize her annulment from Anton.

In The Royal Heir, regardless if Liam is your spouse or not, Olivia no longer harbors romantic feelings for him. In Book 1, Chapter 7, if you decide to throw Savannah a slumber party to end her bachelorette party, you all play "Truth or Dare" and she is asked about her love life. If you press her, she admits to wanting more from Liam in the past. However, she knows she is not a child any longer and that there's more to life than a girlish fantasy of who she wanted him to be or how things might've been. Although he will always be important to her, that doesn't mean she can't move on. If you do not press her, she gives you a grateful smile and keeps her thoughts to herself. In Chapter 17, at her duchy, he points out to her that he can tell when she's lying.

In the end of The Royal Finale, Olivia is appointed to Captain of the King's Guard. She tells you that she and Liam have been working to rebuild the King's Guard from the ground up. If you are not married to Liam, you can encourage her to give herself a fresh start with Liam. If you do, she asks him to dance.

Olivia's parents attempted a rebellion and were killed as a result, leaving Olivia orphaned when she was just 5 years old.

In The Royal Heir, you learn more about Olivia's parents and relive her memories if you choose to. She remembers them not being home in Lythikos for her fifth birthday as they were planning "Operation Snowspear". She also states she learned to operate a torsion ballista at age five, which could have happened before or after their deaths.

In the beginning, Olivia is your rival. From the moment she meets you, Olivia gives you a hard time. She advises you to kiss the king's shoe at the Masquerade Ball and if confronted, she says it was a prank. In Book 1, she often belittles you, and you can choose to respond in kind or by being the bigger person, the latter usually improving your relationship with her. Because of what transpires at the Prince's coronation, by Book 2, Olivia starts to change; she wants to work together to unveil the conspirators against the both of you. If you have a strong relationship with her, she will consider you as a friend. She can be chosen as your Maid of Honor for your wedding in Book 3, Chapter 18.

In The Royal Heir, Book 1, she cries tears of joy when she finds out your pregnant. She also accompanies you as your security detail to your doctor's visits, and later offers you and your spouse paintings for your child's nursery.

In Book 2, she manages to break down one of the security doors during the Palace lockdown in order for you to leave the ballroom. However, she is unable to get through the doors separating your doctor from you, and advises Liam to sign the Auvernal treaty to get you the medical help you need. When the Auvernal presence in Cordonia becomes overbearing, she invites you and your friends to Lythikos and provides you a training regimen to increase your endurance and remind you what you are fighting for.

In Book 3, she is the vote that stops the first Conventus Nobilis from stripping Liam of power and taking your daughter away. She tries to help you by finding incriminating evidence against Barthelemy, but is captured before she can deliver the news to you. In Chapter 14, with the help of Amalas, you and your friends rescue her from Vance Kovac's mansion and she tells you about Barthelemy's involvement in Queen Eleanor's death. Because it would be her word against Barthelemy's, she cannot accuse him publicly and instead watches over your daughter while you and your friends go to Auvernal to extradite Godfrey. You have the choice to send her a video message for her to play for your daughter and later receive one in return.

Olivia and her aunt have an extremely strained relationship, which is evident on the rare occasion when her aunt makes an appearance. This is partly due to the lack of emotional support she received from her aunt while she was growing up and the fact that Lucretia abandoned her for much of that time.

When her parents left for "Operation Snowspear", they told Olivia that Lucretia would be there for her on her birthday, but she wasn't.

It is revealed at the end of Book 3, Chapter 12 that Olivia is betrothed to Anton Severus. Her parents had signed a certificate of betrothal that stipulated that she and Justin would be in a legally binding marriage once they both turned eighteen. In Book 3, Chapter 22, if Liam is not your spouse, he invites Olivia to dinner to finalize her annulment.

His failed coup and acts of treason left Lythikos in a disharmonious state, which Olivia constantly has to rectify in The Royal Holiday and The Royal Heir, Book 3.

"A duchess must do what's right for her people, not just what they want her to do. It's my responsibility to know the difference."
—Olivia to You

Because Barthelemy can't win Olivia's vote in the Conventus Nobilis, he tries to undermine her leadership in Lythikos by stirring the Lythikans against the Crown and Cordonia. He promises to give them independence and sovereignty, something that no other leader has promised them before. However, Liam says that Lythikos relies on the subsidized food imports from the rest of the kingdom, and it would be too expensive for them to be self-sufficient and independent. Olivia takes offense to that, but Liam points out that "strength" does not equal food. You have the chance to prove to Olivia that Barthelemy is wrong and she will stand with you in front of her people. If you are unsuccessful though, the Lythikans are unimpressed by you.

Shortly before The Royal Heir, Book 3, Chapter 12, Olivia is outmaneuvered by Barthelemy and captured by hired mercenaries. Barthelemy knew that she would be searching for leverage and incriminating evidence against him, and his men ambush her outside one of his properties. They destroy the ledger she found containing proof of his involvement in Queen Eleanor's assassination, and imprison her in Vance Kovac's mansion outside of Cordonia. With Olivia out of the way, he brings Lucretia to the Royal Palace and has her cast House Nevrakis's vote in the second Conventus Nobilis.

After you and your friends rescue her, she returns to Cordonia to Barthelemy's surprise. Without proof, she knows she cannot accuse him of the crimes against her but instead uses her position to keep watch over your daughter.

Misha is Olivia's bonded wolf. As a symbol of Lythikos, their wolves are fierce and mistrusting, but willing to fight if their loyalty is won. In the old days, the wolves would hunt their quarry between the Triumph Festival's arena bouts; now they are honored on wolf preserves. Olivia states her wolf's pack roams the mountains where no man can survive and come down during the festival when they sense their bonded person is near. If you decide to cement your daughter's bond with a wolf cub, Olivia states it will be an omen that she'll be a good queen for Lythikos. 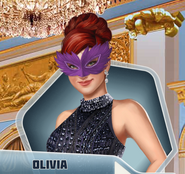 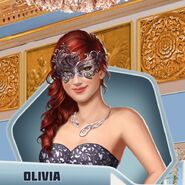 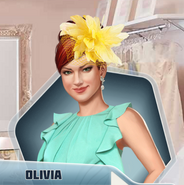 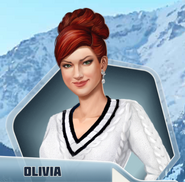 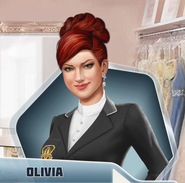 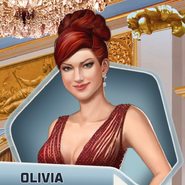 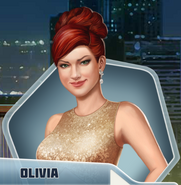 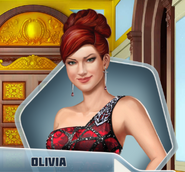 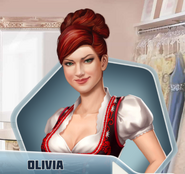 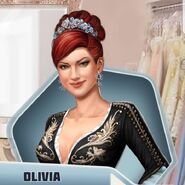 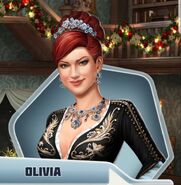 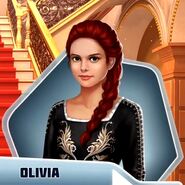 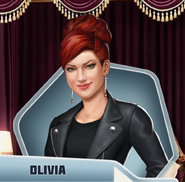 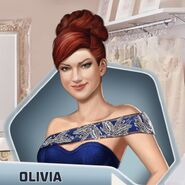 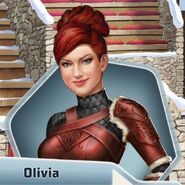 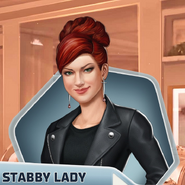 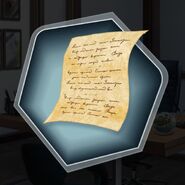 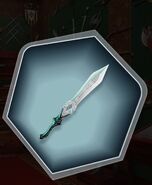 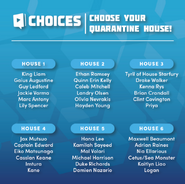 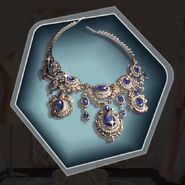 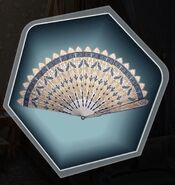 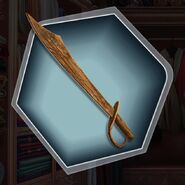 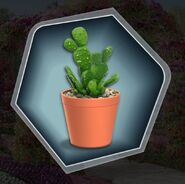 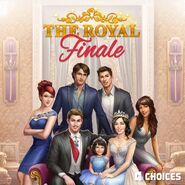 Olivia in The Royal Finale