Our lands will never be safe from them until we are one. One Kingdom. One King... There will be only my kingdom.

King Luther Nevrakis, a character in The Crown & The Flame series, is the main antagonist of the second book and, in a sense, the entire story. He was the king of Abanthus until he took over the Five Kingdoms by killing their rulers. He was the King of Stormholt and of Lykos until he was deposed by Kenna Rys. He is first seen in Book 1, Chapter 1.

Luther is a middle-aged man with gray hair. He wears a black buttoned robe, a black cape held by two silver fasteners, and a silver crown. He wields a longsword.

Luther is a sadistic, psychotic tyrant. He planned to eliminate the Royalty of the Five Kingdoms along with his son, Prince Marco, and his soldiers; he succeeded and forced Kenna into hiding. His ruthless and violent traits earned him the nickname The Blood King.

He deemed Kenna as a feeble princess at the start of the story, and as such was surprised when he found that not only was she alive, but also had an army behind her. He continued to belittle her even after his defeat, and had too much pride to praise her.

As a ruler, he was realistic and severe. He viewed being a ruler as someone who has to accept all the hard decisions willingly, and carry them out without regrets. Unlike his son, he viewed his men as expendable; he threatened one soldier during Azura's invasion that he'd gut him out himself for disobedience (if chosen as commander of the Nevrakis). Kenna also noted he has no respect for his servants as well.

Luther was not very affectionate to his family either. He felt satisfied after Kenna managed to tame Zenobia, and reacted violently when his son Diavolos disagreed with him, sarcastically asking for his strategy and dismissing it bluntly. In fact, Diavolos mentioned he had a rough childhood. For some reason he had no concern over the fate of his other son Marco, whether the latter is imprisoned or dead.

Perhaps his most notable trait after his greed for power is his treachery. Luther had no plans of forming a coalition with the other kingdoms, betraying them minutes after feigning alliance by killing their rulers. He then tried to do the same to Kenna after their battle over Azura (in which he did not help), showing that his surrender was merely a deceit, and his loyalty was purely to himself. In fact, he is aware of his exploitative nature; if Kenna chooses him as commander of the Nevrakis in Book 3 Chapter 12, he would acknowledge that she would come to regret doing so in the next chapter.

However, greed was not his driving force after all, but survival of the fittest. In Luther's final moments, he smiled at Diavolos as he and Kenna stabbed him together, proud of his son's decision. The Nevrakis prince revealed that his father had wanted to die by Kenna's hand; Luther believed that the world is all about the strongest killing their way to the top. This explains how his murder of Queen Adriana and betrayal of Kenna were both "not personal".

Luther was protective of the Nevrakis name; he accepted Annelyse's dance-off challenge for Zenobia to safeguard his family's honor. In regards to family, he is an authoritative father, scolding Zenobia for talking down Diavolos and for threatening Kenna during their alliance dinner, and chastising Diavolos for taking war lightly; nevertheless he cares for them, inquiring Diavolos's whereabouts during the dinner and reacting violently when Kenna taunted him about shaving Zenobia bald. He values respect among kin, as when he reminded Diavolos about his eternal status as his father, as well as for slapping his uncle Vassilios.

Diavolos recalled Luther being a good father, once sharing good traits with Marcellus Rys. However, when his father died, Luther became too preoccupied with the war to spend time with his son; despite that, his first wife could always cheer him up.

One day, while Luther was attending a war meeting, his wife was assassinated by Lightning, one of Azura's assassins. He then immersed his whole life into the war, often refusing to eat and cutting off communications with his son. When Diavolos won his first battle, he threw a banquet for his son and began training him personally ever since.

Luther is presumed to be skilled with a long sword, it being his weapon against Kenna during The Battle of The Bay. His expertise was enough that he managed to hold his own against the Queen momentarily. He also wielded a dagger with which he used to betray Kenna.

Luther Nevrakis was invited to a feast at Stormholt with all the nobility of the Five Kingdoms, hopefully, to form an Alliance with the Rys family and the other kingdoms in order to defeat The Iron Empire, but he betrayed everyone there. He secretly brought a large battalion of Nevrakis soldiers through a secret passage in the castle and began killing all the nobles that he could find, including Kenna's mother. After murdering every Stormholt soldier in Kenna's castle, he proclaimed himself the new King of Stormholt. Two years afterward, he decided to attack the Iron Empire with most of his army; before leaving, he appointed his son Marco Nevrakis in charge of the castle. The exiled Princess Kenna Rys decided to use this span of time to her advantage and so began to build an army against Prince Marco and the Nevrakis. Her army was victorious and she retook control of her Kingdom.

In the beginning, Luther was still away fighting the Iron Empire. It is revealed that he placed his family members in charge of other kingdoms as regents. His brother, Vassilios, ruled Thorngate until he was incinerated alive by Dom. His daughter, Zenobia, ruled Lykos until she was deposed by Kenna and Rowan. He battled Kenna and her army one last time at the Battle of Lykos, where he was defeated. Luther then revealed that he was retreating from the Iron Empire when he surrendered to Kenna, and that had he had his entire navy, Kenna would not have stood a chance. He offered to become one of her allies in order to destroy the Iron Empire.

After his defeat by Kenna's hand, Luther was tossed into his own dungeon in Lykos Castle. Kenna then invited him and his family to a dinner in the castle to form an allegiance with her against the Iron Empire. However, after their victory over the Iron Empire, Luther tried to murder Kenna in the throne room by stabbing her shoulder but was killed by his son Diavolos and/or Kenna Rys in the final chapter, depending on whether or not the player has managed to form an alliance with Diavolos. If the player did not manage to do so, Diavolos would align with his father and execute Kenna together, where she would either kill them both or cry for help and Sei would ignite both Nevrakis alive, killing them.

Luther is well acquainted with Adriana, and considers her to be a weak-willed and ineffective ruler. Her idea of creating an alliance is something he dismisses as ludicrous. However, he has no personal distaste for her. When discussing the other rulers of the Five Kingdoms, while he admits that the other rulers were a den of treacherous snake, he deliberately states that Adriana was not like that.

He and his son Marco attend the feast organized by Kenna's mother Adriana that is supposed to bring peace to the Five Kingdoms. They use this opportunity to kill the other leaders, including Adriana. Kenna is forced into exile and becomes determined to win her kingdom back and get her revenge by abolishing him.

In Book 2, Kenna and Luther meet at the Battle of the Bay where the two armies clash and Kenna manages to capture him. She can either sentence him to death or life imprisonment, just to learn from him about a bigger threat.

In Book 3, Luther and Kenna form an alliance in order to defeat the Iron Empire and its leader Azura. When presented with the choice of who leads the Nevrakis soldiers during the battle against Azura's army, Kenna can choose between Luther, Diavolos, and herself. Luther turns his back on said alliance the day after Azura's defeat with a surprise attack on Kenna.

Luther apparently does not hold him in high regard as he does to his other sons and daughter, even calling him "stupid son".

In Book 3, when Luther and Kenna form an alliance in order to defeat Azura, Luther asks for his son Diavolos to join. In a premium scene, Kenna and Diavolos can talk about his past where Diavolos reveals that after the death of his mother, Luther changed and wasn't there when he needed him. This only changed when Diavolos started learning how to fight in order to gain his father's respect.

Zenobia is well aware of her father's negative points, and urges Kenna to limit his freedom as much as possible. On the other hand, Luther is a stern yet supportive father to Zenobia who gets agitated in Book 2 if Kenna tells him she imprisoned Zenobia. In Book 3, if you have Diavolos tell the group about the Nevrakis ball, it's revealed that Diavolos has helped her keep her crush on Tevan a secret from their father. According to Diavolos, Zenobia was afraid that Luther would probably start the courting for her and force Tevan to marry her. 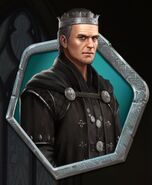 Larger View
Add a photo to this gallery

Retrieved from "https://choices-stories-you-play.fandom.com/wiki/Luther_Nevrakis?oldid=380202"
Community content is available under CC-BY-SA unless otherwise noted.