After quitting your job, you and your friends face new challenges in work, life, and ESPECIALLY love.

Chapter 1: What Happens Next Will Shock You

After quitting your job, you and your friends face new challenges in work, life, and ESPECIALLY love.

Chapter 2: The Hot New Company Everyone Is Talking About

It's a fresh start for everyone as the gang adjusts to new jobs, new businesses, and new... video games?

Chapter 3: These Cosplays Are Better Than The Real Thing

You and Ben take on Hero Con, and love is in the air for one of your friends...

Chapter 4: 4 Things Cowboys And Bartenders Have In Common

You and Leah meet with an important business investor... but will you need to sell out to seal the deal?

Chapter 6: The 6 Best Spots For A Guys' Night Out

You and Leah officially open your office for business, while Keo goes on a date... with the guys?

Chapter 7: 7 Things That Happened (and Stayed) in Vegas

You and your frieds head to Las Vegas for Brooke's elopement... but will Keo's secret crash the wedding?

Can the guys survive a bachelor party with Keo?

Chapter 9: Forget Everything You Know About Weddings

It's Brooke's big day! But can you and your friends reconcile with her?

Leah faces someone from her past as Mark teams up with an unexpected partner.

Chapter 11: 11 Signs You Grew Up With An Older Sibling

You and Leah head to LA, while Mark deals with an unexpected, and unwanted, guest.

Chapter 12: 12 Things You Wish You Could Forget About Last Night

Cole wakes up with a tattoo and a missing phone... What exactly happened last night?!

The gang is headed to Burning Sands! But will someone's relationship go up in smoke?

Chapter 14: The 14 Job Offers Millennials Get

You and Mark head to Seattle while Camilla makes Leah a very tempting offer...

Chapter 15: 15 Tips For When Family And Work Collide

After a big fight, Mark's relationship with Isaac is rockier than ever! Will adivce from an unexpected source help them sort things out?

Ben, Leah, and Horatio come to crossroads in their careers... But will a visit from Leah's little sister shake things up?

You and your friends take a trip down memory lane during Brooke's moving out party... but is every memory as rosy as it seems?

Chapter 18: This Series Finale Will Have You Shook

#LoveHacks concludes with the climatic Blackbourne Gala... But who will you choose to spend your happily ever after with? 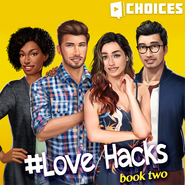 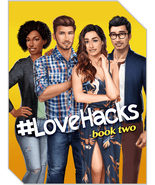 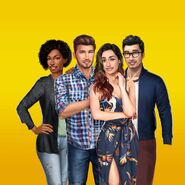 Cover as Shown in the New UI (Version 1) 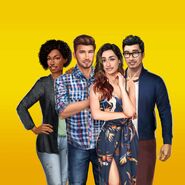 Full Cover as Shown in the New UI (Version 2 - Fixed) 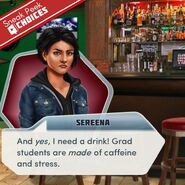 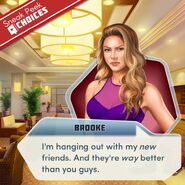 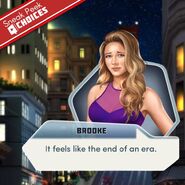 Click here for the walkthrough of this book: LoveHacks, Book 2 Choices.

Retrieved from "https://choices-stories-you-play.fandom.com/wiki/LoveHacks,_Book_2?oldid=362732"
Community content is available under CC-BY-SA unless otherwise noted.