The Royal Romance
The Royal Heir

Those in power have a responsibility to use their power for those who have none.

— Liam to Your Character[1]

King "Liam" (previously Prince "Liam"), a character in the The Royal Romance and The Royal Heir series, is the Crown Prince of Cordonia and a potential love interest for Your Character. He became the King of Cordonia by the end of Book 1. His default name is "Liam", but the player can pick a name for him. He is first seen in Book 1, Chapter 1.

Liam is a simple, pure-hearted yet sophisticated individual. He knows his responsibilities and limits, and always cares for others before himself. Liam is always trying to be the king Cordonia deserves, his love for Cordonia inspirational.

He tries to maintain an air of stoicism in front of the public and his court, but those that know him better can see more; for example, Maxwell sees how he looks at you, and Queen Regina notes the way his eyes light up when he sees you. He is a passionate and committed partner when it comes to relationships, either platonic or romantic: he falls in love at first sight with the MC, and does everything in his power to help her get by courtly life; he has been childhood friends with Olivia and is very supportive of her, and he helps Drake and Maxwell whenever he can. He rarely gets angry as it takes a lot to make him lose control, and Drake has only seen him angry once (when you had been forced to leave from the Coronation).

He is shown to be a skilled martial artist given that he helps his security team fight off assassins in Book 2, Chapter 19.

Growing Up As Son of A Monarch

Even though Leo got the reputation as the palace prankster, there were times that Liam snuck out of diplomacy lessons. Maxwell says that he and Drake just encouraged Liam’s natural free-spirited instincts. He went through a phase where he slept with his crown for about 1 to 2 weeks; otherwise, he only wore it during stately affairs.

"Thank you for bringing us here. I can tell the guys are enjoying themselves already."
"I bet you're used to putting everyone else first."
"And why would you say that?"
"I can tell. I'm good at reading people..."
—King"Liam" and Your Character

King (then Prince) “Liam” is first seen in Book 1, Chapter 1, entering a New York City dive bar, looking for his friends as they randomly selected the bar Your Character works in for his bachelor party. He introduces himself to you and sparks fly. As your bar is closing, he walks over to you and asks which club would be a good one to go. You have the choice to tell him about the hottest club in town, or a secret cove by the beach (whichever one you pick, you end up going with them). Either at the beach or in the club, Liam will tell you that even though he had a nice time with his friends, he really wanted to see the Statue of Liberty. This leads Liam to tell you that he is the Crown Prince of Cordonia, which in turn leads to a discussion about what your passion and motivations are. For diamonds, you can take Liam on a boat ride around the Statue of Liberty, where you have the chance to kiss him.

"This entire series of events is set up not just to give me time with my potential matches, but also to give my parents, the Council, and the people of Cordonia time to get to know the future queen. From now on, everyone will be watching you."
—King"Liam" to Your Character

Chapter 3 is the next time you and Liam have a conversation. Your Character waits in line to speak to him; and Liam is surprised when he sees you and is flattered that you came to be a suitor. Liam tells you that the rules in Cordonia are different to being in New York and that the system is set up so that not only himself, but Liam’s parents, the Council and the people of Cordonia have time to get to know their future queen. He tells you that this means that all eyes will be on you and you must make a good impression. If you ask him about what he thinks, he tells you that he knew what he was getting into and the responsibilities laid upon him.

In the next chapter, Liam and Your Character share a short dance before chatting outside of the Palace, after you save him from an awkward and tedious conversation with Penelope. Outside, Liam tells you about the recent history of Cordonia, as well as his own recent troubles and fears. He also sprinkles tales of his youth with his best friend, Drake. The two of them used to play many games including one they created (maze-tag) in the royal gardens. Once the two of you head back inside, Liam solemnly tells you that although he should be fair and spend some time with the other girls, you are special to him. You can choose to extend the night and meet him in the gardens (for diamonds) or retire to your suite. If you choose the diamond option, you two will end up playing a game of maze-tag where you have the option to kiss Liam (again).

Liam meets Your Character while on vacation in New York with his friends Maxwell, Tariq, and Drake, when Your Character serves them at the bar. As you leave after hours, he approaches you and apologizes for his friends' difficult demands. You offer to give them a tour around the city, either taking them to a club or to the beach. If the player has enough Diamonds, she can take the Prince to see the Statue of Liberty where they share a sweet moment. Maxwell senses the strong connection established between the Prince and Your Character, thus he sponsors you and brings you to Cordonia to join the Prince's other potential brides. Since Maxwell doesn’t have a sister, he chooses Your Character to represent his family's noble House for the selection of the Prince's bride. Even if you don't spend extra time with him in Book 1, he falls in love with you and wants to propose to you at his Coronation. When that doesn't happen, throughout Book 2, he still tries to maintain a relationship with you, even if you keep things formal and platonic. If you spend time with him in the Grotto, he tells you he would abdicate the throne for you. If you spend time with him in Paris, he says he would run away with you to keep you safe. He will propose to you in Book 2, Chapter 16.

He is Liam's older half-brother. The Royal Romance, Book 1 occurs after the events of Rules of Engagement, Book 2 where European Guy abdicates the throne of Cordonia as his heart was set elsewhere. Liam finds himself next in line to the Cordonian throne. He is occasionally mentioned by Liam. In Rules of Engagement, Book 3, Chapter 1, if Main Character (Rules of Engagement) is engaged to Leo, he tells her that he has to miss their first meeting with the wedding planner because he has to help Liam prepare for a meeting with the French ambassador. In Chapter 17, Liam is unable to attend the wedding, instead sending Leo a letter congratulating his brother and new wife, saying that he can't wait to meet his new sister-in-law and tell her all the stories of Leo embarrassing himself at court.

According to Leo, when they were children, Liam went through a phase where he wouldn't stop poorly whistling the tune to The Andy Griffith Show. It drove them crazy but Constantine put up with it as he got along better with Liam than Leo. During one of their summers at Applewood Manor, Liam hid from their parents because he didn't want to leave. Leo took the blame even though Liam told him that he didn't want his older brother to get in trouble. Leo said he was always in trouble so a little more wouldn't hurt. Leo said, "A duck in the pond doesn't mind the rain. It's already wet." Leo persuaded Constantine to buy a claw/crane machine for the palace, and he would put Liam’s things in it, like his toothbrush, favorite stuffed dragon, and his crown, so Liam had to play the machine to win his things back. When they and their parents took a diplomatic trip to Morocco, Leo told everyone that Liam loved chicken tagine even though he hated it. Since it was rude to turn down whatever their hosts would serve, Liam was forced to eat chicken tagine often... to the point that he grew to love it. Liam retaliated some way involving fireworks going off in the boutique. The prank war ended when Leo accidentally locked a visiting earl's son in a closet, thinking he was Liam.

Approximately a year before the events of The Royal Romance, Book 2, Leo and Liam swam at the Blue Grotto. Liam had found a pearl and Leo told him it would win the heart of any woman he gave it to. Liam hid the pearl away, figuring he would find it again once he found someone he wanted to give it to.

Constantine is Liam's father. As stated in Rules of Engagement, he needs the consent of his wife to do practically anything. Liam was strongly against the King's participation in the MC's scandal, and remained slightly hostile to him afterward, even reminding him of his (Liam's) position as the new king.

In Book 3, Liam is affected by Constantine's death and misses him dearly. He remembers when he was a child, finding his father in the throne room. Liam would sneak over by the curtains to peek at his father while Constantine was conducting business. Constantine couldn't halt proceedings, but he would always spot Liam and wink.

Regina is Liam's step-mother. She appears to be condescending towards your character.

Bastien is Liam's bodyguard when Leo abdicates and once he becomes King. Liam trusts him as his bodyguard but suspects him to be involved with Riley's frame-up. He forgives him nonetheless as his actions were dutiful and not personal.

Drake is Liam's best friend. He and Drake got into a lot of mischief when they were younger. He got lost while camping while Drake caused a palace lockdown while they were playing Hide-and-Seek, causing the game to be banned from then on. They also broke a part of a chandelier when they were playing soccer inside since it was raining outside. They would also bet each other push-ups; the loser had to do push-ups with the winner on his back. When they were teenagers, they thought about getting tattoos to bend the rules a little and get something that would be 'his'. In the end though, they didn't.

In The Royal Heir, Drake reveals that Liam went through a 1 to 2 week phase where he wore his crown everywhere when they were children. Liam's parents also let him sleep over in the Walker family's quarters once or twice. Liam was so proud to help Bianca microwave leftovers; he thought he was "cooking". Drake also taught Liam how to drive, and there may or may not be a royal golf cart in one of the capital's ponds.

He and Madeleine were engaged from the end of Book 1, even though they don't love each other. In Book 2, Chapter 15, Liam broke off his engagement to Madeleine. 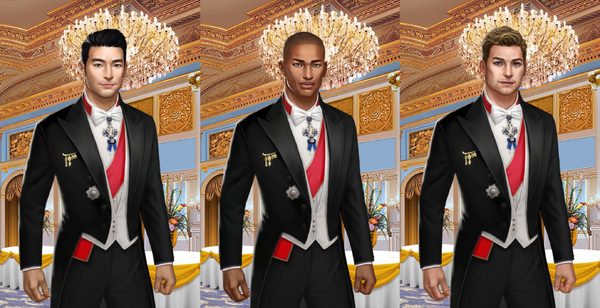 Retrieved from "https://choices-stories-you-play.fandom.com/wiki/King_%22Liam%22?oldid=308997"
Community content is available under CC-BY-SA unless otherwise noted.