Home for the Holidays

Home for the Holidays

Welcome to Winter Haven! Who will you kiss under the mistletoe... your workaholic boss, your high school sweetheart, or your childhood friend?

Welcome to Winter Haven! Who will you kiss under the mistletoe... your workaholic boss, your high school sweetheart, or your childhood friend?

When your boss unexpectedly shows up in Winter Haven, will he disrupt your plans to have a holly jolly Christmas?

The annual Santa contest has come to town... but did you make the nice list?

Chapter 4: Do You Wanna Build A Snowman?

Winter Haven's snowman contest might be your last chance to change Nick's mind... or set the stage for some holiday mischief!

Things heat up in Winter Haven when you hit the ice, but who will you skate with?

Chapter 6: Written in the Stars

It's the annual tree lighting ceremony in Winter Haven... but will a special someone have you seeing stars?

Chapter 7: The Night Before Christmas

Christmas Eve has come to Winter Haven... but what will Santa leave under the tree?

You make one final attempt to change Nick's mind during the Founder's Festival... but will he open his heart?

Chapter 9: A Haven in Winter

Shaken by Nick's departure, you await the New Year by spending quality time with family and friends.

It's time for Winter Haven's New Year's Eve bash! But will an unexpected guest ruin your chances to end the year on a high note? 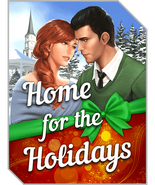 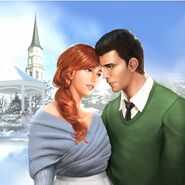 Home for the Holidays intro 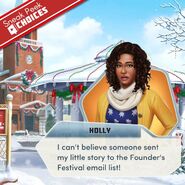 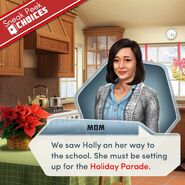 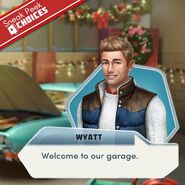 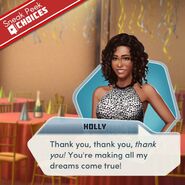 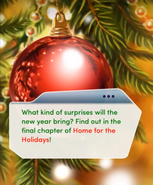 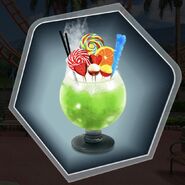 Choices - Home for the Holidays Teaser 1

Click here for the walkthrough of this book: Home for the Holidays Choices.

Retrieved from "https://choices-stories-you-play.fandom.com/wiki/Home_for_the_Holidays?oldid=355927"
Community content is available under CC-BY-SA unless otherwise noted.