Choices: Stories You Play Wiki
Register
Don't have an account?
Sign In
Advertisement
in: Locations, Locations in 'The Crown & The Flame'

Ducitora is a location in The Crown & The Flame series. It is popularly known among the Five Kingdoms as the Iron Empire and a massive empire across the Ocean from the continent where the Five Kingdoms are located. It was ruled by Empress Azura for over a thousand years until her death in Book 3, Chapter 16. She oversaw the transformation and technological advancement of the realm.

Due to its technological edge over the Five Kingdoms, it also has a superior military. The military edge possessed by the Iron Empire allowed them to threaten the very existence of the Five Kingdoms before the events of Book 1.

Over a thousand years ago, the lands that made up the Iron Empire were originally various kingdoms. This changed when Azura, a member of a dying tribe from The Stormlands, challenged the King of Marossi into a riddle contest. If she won, she would succeed him as ruler. If she lost, he would marry her. She won and became the new Queen of Marossi. According to Azura's daughter Lia, however, it was implied that Azura killed the King of Marossi after seizing power from him through dishonest means.

After Azura became queen, she started a campaign of conquest against other kingdoms through similar tactics. With each conquest, Marossi expanded until it covered the entire western continent of Ducitora, with Marossi as its capital. Azura herself states that she finds the name "Iron Empire" rather harsh and that its real name is Ducitora. To celebrate the anniversary of her rule, the Celebration of Light is hosted regularly with a tournament, a fight to the death, in its central.

After officially declaring her kingdom an empire, Azura reached the Five Kingdoms and gave them an offer to join her empire in exchange for improvements in living standards and the local rulers retaining their titles. In case the rulers refused, Azura would take the lands without them. As Hector Nevrakis put it, it was an ultimatum to "kneel or die". The rulers refused, starting a centuries-long war between the Iron Empire and the Five Kingdoms that ended with Azura's defeat and death at the hands of Queen Kenna Rys of Stormholt. 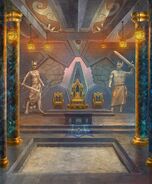