It's court or be courted when you learn you're one of the most eligible heiresses in England! Does true love await you at the grand Edgewater Estate?

Chapter 1: The Journey Ahead

It's court or be courted when you learn you're one of the most eligible heiresses in England! Does true love await you at the grand Edgewater Estate?

It's time to face your father: the Earl of Edgewater... Will he embrace you as a daughter? Or reject you for your low birth?

Gossip is in the air when the sewing circle convenes! Can you thread your way through society... or will a new face help guide you?

All eyes turn to you at the Edgewater garden party! Will you blossom at your first outing in society?

Chapter 5: The Road to London

You are the heir to Edgewater... if you can land a noble husband! Get ready to make your way to London as England's most desirable heiress.

Make your London debut at Mr. Sinclaire's dinner party! Will you make a good impression? Or will Mr. Marlcaster sabotage you?

You're invited to the opera! Shop for a dress to dazzle, then visit a rehearsal to learn about your mother's life as an opera star!

Attend the Opera St. James to see and be seen by the cream of high society... But what is the truth behind Mr. Sinclaire's absence?

When the dowager countess arrives in London unannounced, can she help course correct your debut? Or is the damage irreversible?

Chapter 10: On Your Marks

The races are afoot! Who will catch your eye? Which house's horse will ride to victory?

Chapter 11: The Clock Runs Out

After receiving an urgent letter, Edgewater beckons you home... but will someone stand in your way?

Chapter 12: In Sickness and In Health

A long journey lies ahead... You ride through the night to Edgewater!

Will you prove yourself to be the lady of the estate... Or will your actions cause others to doubt your claim?

The countess has moved against you! Will she ensnare you in her trap, or can you escape in time to stop her?

As the London Season nears its end, attend a grand ball and secure allies to ensure your inheritance!

Your time at the duke's ball is winding down! Can you foil Countess Henrietta's plan once and for all, and secure your future at Edgewater?

Throughout the book, you'll have opportunities to collect various items, like the embroidery frame. Fill your whole Parlor to unlock exclusive scenes. 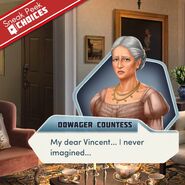 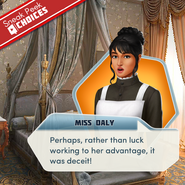 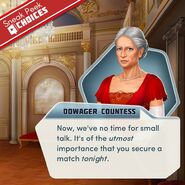 Chapter 16 Sneak Peek
Add a photo to this gallery

Part II of the Q&A for Desire & Decorum 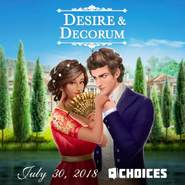 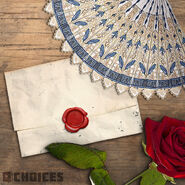 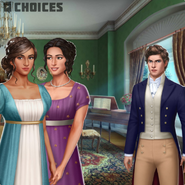 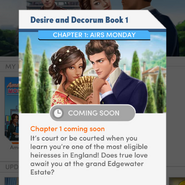 View of London through your carriage window

Your character's house in London (Day)

London street showing the Tower of London and the Opera St. James's

Your character's house in London (Day)

View of the stage at Opera St. James

Poorer side of London near a Church 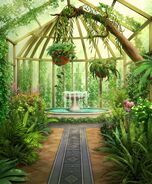 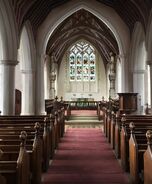 Church on Edgewater property
Add a photo to this gallery 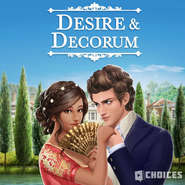 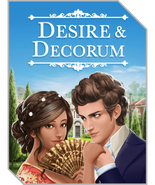 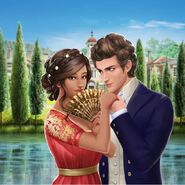 Cover as Shown in the New UI

Ad for Desire and Decorum

On getting Theresa Sutton & Edmund Marlcaster on your side

Invitation for MC to the Opera

Your Character and her LIs in Ch. 9 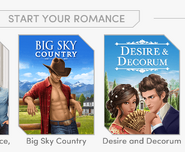 PB's Response to a question about their research for the book 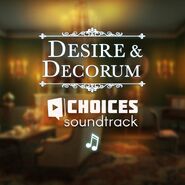 Desire & Decorum - Joy in the Countryside

Click here for the walkthrough for this book: Desire & Decorum, Book 1 Choices.

Retrieved from "https://choices-stories-you-play.fandom.com/wiki/Desire_%26_Decorum,_Book_1?oldid=336045"
Community content is available under CC-BY-SA unless otherwise noted.