Injuries due to falling rubble

Rules of Engagement
The Royal Romance

Those without power are always interested in those who hold it. And power recently gained appears the easiest to seize.

According to Hakim, Constantine was a gentler king when he was younger, before Liam's time. He was always vigilant against threats but he became outright paranoid after Eleanor's death. From that point, he saw threats in every shadow and shut out the court, including his oldest friends. It took him years to change back to the man he once was, and Hakim attributes that to Liam and Liam's friends.

Events of The Royal Romance

When confronted about his involvement he explained that he was dying and could no longer ensure the safety of King "Liam" and Cordonia, and since Your Character was the favorite to become Queen, he decided to run you out of the race and make sure Madeleine would take the throne alongside "Liam". Ultimately, Constantine's involvement in the plot never surfaced as it would have shattered the Cordonian people's trust if word ever got out; instead he was commanded by now-King, Liam to help repair the damage he has caused in any way. He advised Your Character to look for Tariq as he was the only person who could clear her name.

Although at that point in time Constantine said he has never regretted what he did, but is sorry that it had to happen in the first place, in Book 3, Chapter 10, he tells you he regrets his role in the conspiracy and says you have a way of bringing people together that he does not understand. Your Character can choose whether or not to forgive him.

Regina Rys is Constantine's third wife. In The Royal Romance, Book 3, Chapter 9, he tells the story of how he fell in love with her: they were acquaintances until she approached him at a Costume Ball some time after his second wife died.

European Guy (Leo) is Constantine's eldest son. If Leo is Main Character (Rules of Engagement)'s fiance, he tells her that Constantine showed him the importance of love, that he gave up everything for his country and his people. It was Constantine's fierce love for Cordonia that made Leo want to feel that way about something or someone.

King "Liam" is Constantine's second son. Despite the fact that Liam was not supposed to be his next in line, he and his family agreed that Liam is more fit to be king instead of Leo.

Constantine's first wife was the former Queen of Cordonia. She is Leo's mother. She left Cordonia because she couldn't handle the royal life.

Constantine's second wife, Eleanor, was the former Queen of Cordonia. She was Liam's mother. He was saddened by her death when she was poisoned by their enemies when Liam was still young. Later, it was revealed that she died from a poisoned goblet that Godfrey had given her, and that Constantine was unaware of his friend's involvement in her death.

After her death, Constantine became more paranoid and closed off to his closest friends and confidantes. Godfrey believed Constantine was more unreasonable and more dangerous to them.

It is revealed in Book 2 that he was the one responsible for the scandal that initially tarnished your reputation. In Book 3, Chapter 10, He once again apologizes for his actions against you and gifts her with the Cordonian crest. According to him, it has been in the royal family for generations. He believes that you deserve it as a token to show that you'll always belong in Cordonia. 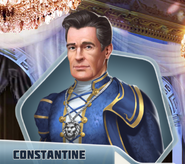 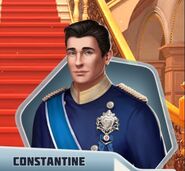 Young Constantine
Add a photo to this gallery 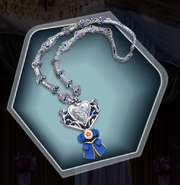 Pocket watch
Add a photo to this gallery

Retrieved from "https://choices-stories-you-play.fandom.com/wiki/Constantine_Rys?oldid=359787"
Community content is available under CC-BY-SA unless otherwise noted.