Choices: Stories You Play Wiki
Register
Don't have an account?
Sign In
Advertisement
in: Characters, Female, 'A Courtesan of Rome' Characters,
and 4 more

Queen of Egypt
Vassal of Rome

Chapter 20
Cleopatra, a character in the A Courtesan of Rome book, is based off the real life Cleopatra. Although she is seen in a premium scene in Chapter 8, she makes her first official appearance in Chapter 18.

Cleopatra has brown eyes, shoulder-length black hair and tan skin. She is described as slender, beautiful but brittle. She wears a golden cloak, an Egyptian headdress denoting her title as Queen (or Pharoah), golden bodice, and light blue tunic.

At first, she seems overconfident and haughty, but Delphinia's vision show that the queen is actually insecure and struggling, unsure of her position. A Priestess of Isis says Cleopatra is not always open to advice. She is jealous of Caesar's wife Calpurnia, and shows huge disappointment when Antony offers Main Character to Caesar as a gift. She often behaves childish and selfish, and obviously doesn't understand both Caesar's situation and Roman Republic's law. If Main Character decides to spend a night with her (with or without Caesar), the queen shows also lustfulness. She seems to be prone to manipulation, which is how Main Character is able to separate her from Caesar.

Ptolemy is her brother, who with his advisers, usurps her power, claiming to be the rightful ruler of Egypt. In Chapter 15, the Priestess of Isis tells Delphinia that they are at war because his supporters would rather see a spoiled boy on the throne more than a woman and they resent her for taking power away from them.

In Chapter 17, Antony reveals that Caesar is on his way back to Rome with Cleopatra beside him. In Chapter 18, it is revealed that they have a son together, Caesarion. When Cleopatra announces that their son is the heir to Egypt and Rome, Caesar doesn't condone or deny it, which angers the masses. Their views appear to differ, as she is the ruler of Egypt and doesn't understand why he isn't the "King" of Rome. She believes Rome can be an empire where he is the man of vision that leads them. She is also angry that he is still married to Calpurnia. If you decide to seduce them (premium scene), you discover that Caesar set Cleopatra up in Legate Aquila's former villa. He took the villa as settlement to a debt that Aquila acquired and put Cleopatra there as it was far enough from Calpurnia. He also doesn't bring Cleopatra to the party he throws for the Senate at Pompey's former villa.

In Chapter 18, when Antony offers you as tribute to Julius Caesar, Cleopatra is bristled by your presence. It is your choice to win her over or alienate her. You can flirt with her and possibly seduce her alone or with Caesar together in a premium scene. In Chapter 20, you can persuade her to leave Rome and return to Egypt, telling her that the people know Caesar won't marry her or that Caesar thinks of her as a pet. When you talk to Antony later, he says Caesar cannot leave anything to Caesarion in his will because Caesarion is not a Roman citizen.

In Chapter 8, if Delphinia chooses to see the visions of her family and the future, Cleopatra is seen welcoming Caesar to Egypt. In Chapter 15, after the priestess bids Delphinia welcome, the latter succumbs to a vision of Cleopatra giving birth to Julius Caesar's child, what reveals to be Rome itself. Soon after this Caesar appears and holds the "newborn" in his arms, growing large enough to hold all of Rome and Egypt at once. Caesar states that the infant city is his son. When Delphinia tells the priestess what she saw, the priestess tells her that she will have to speak to Cleopatra herself as the Queen doesn't accept advice in general.

In Chapter 17, Marc Antony tells you about Cleopatra as Caesar's newest love interest, and worries about her growning influence over his friend and commander. She's a main reason why Antony asks Main Character to be oficially his gift for Caesar, and actually spy on latter one. In Chapter 18, they meet, but don't talk to each other directly. Later, if you decide to seduce her (with or without Caesar), she is indifferent to Marc Antony's name and considers him only as an useful lapdog. Later, if you are in good terms with Antony, you meet him in your scholae and report him what you learn. Despite your conclusions, Antony tells you that Caesar will only discuss Cleopatra as a vassal queen of Rome and will hear nothing spoke against her. 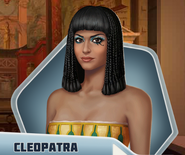 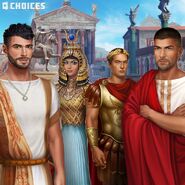 Caesar and Cleopatra Speaking to their Subjects in Chapter 18 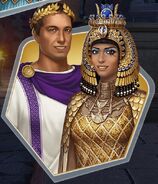