Choices: Stories You Play Wiki
Register
Don't have an account?
Sign In
Advertisement
in: Characters, Male, 'Rules of Engagement' Characters,
and 8 more

Kingdom of Cordonia
Via Imperii

Rules of Engagement
The Royal Romance
The Royal Heir

He often shows no expression and seems very serious. In Rules of Engagement, Book 3, Chapter 8, when he joins European Guy's bachelor party, he is described to be always daunting and silent. European Guy can tell Main Character stories in which Bastien was overly protective, for example when he tried to sneak away to a water park which led to a lecture by Bastien about diseases in the water. During the bachelor party, Bastien is able to cut loose, knocking back drink after drink while being cheered on, much to the surprise of European Guy. Main Character states she doesn't think she's ever seen him smile.

It is revealed in The Royal Romance, Book 2, Chapter 8, that he is one of the people involved in the plot against you and that he coerced Penelope into setting you up. It is later revealed that he was following King Constantine's orders and he has expressed remorse for his actions.

Drake says he is very dedicated to his job and he doesn't think Bastien has many friends.

Events of The Royal Romance, Book 2

Conspiracy Against Your Character

During the fashion show in Book 2, Chapter 8, Penelope revealed that Bastien was the one who gave the order for the photographs to be taken and for it to be arranged that Tariq would find Your Character in her room. When Your Character and Hana tells the rest of the group about it, they are all shocked especially Drake as he is very fond of Bastien having being looked after by him when he was younger.

When confronted about it at the Bachelor party, Bastien gave up very little information, which in turn causes an uproar between Drake, Bertrand and Maxwell about Drake's sister. They leave and after some thinking, Drake comes to Your Character stating: "There's a very short list of people that Bastien would feel compelled to obey, no matter what the order". Suggesting that the conspiracy runs all the way to the top and that they should investigate the former king and queen. Your Character talks to Regina in Book 2, Chapter 11, and mentions Bastien's name to see how she reacts. Regina answers that Bastien has always been loyal to Liam's late mother, and while he is respectful to her, she doesn't 'believe to measure up to her predecessor in his eyes', so she avoids giving him any orders and has her own staff.

Bastien was European Guy's bodyguard and is very loyal to him. He remains with Leo until the day after the Ember of the Sea Gala in Rules of Engagement, Book 2, Chapter 21. Because Leo abdicated the throne, Bastien is reassigned to guard Liam starting that day. If Katie marries Leo, Bastien returns to be his best man at the wedding. His best man "speech" consists of prolonged eye contact with Leo and his bride before raising his glass of whiskey and downing it before exiting the dance floor. Leo says that was beautiful.

One time when he was younger, Leo tried to sneak away to a water park, but Bastien caught him and lectured him for an hour about the diseases found in the water.

Bastien is Prince "Liam"'s bodyguard (starting one day after the Ember of the Sea Gala in Rules of Engagement, Book 2, Chapter 21) and is very loyal to him. When his involvement in the Conspiracy against you is discovered, Liam is hesitant about trusting him again. Bastien says he did it under orders as he serves the Throne of Cordonia (meaning previously, King Constantine) but now that Liam sits on that throne, he serves him and will do so unless Liam dismisses him. Liam forgives him and allows him to remain, the quickness of said forgiveness is dependent on your feelings towards Bastien.

In The Royal Finale, it is revealed that he is a member of the Via Imperii. If you angrily tell him about all of their crimes, he swears to you that he had no idea the extent of what they had done and that he is a bigger fool that he thought he was.

Bastien looked after Drake when he was younger, as the former was a junior agent when Drake's father, Jackson, was in charge. Because Bastien had no family of his own nearby, Jackson would often invite him over to the Walker family home and they would have many dinners together. Bastien even babysat for Drake and Savannah, and Drake tells you that the former was surprisingly very lenient as a babysitter, allowing the children to stay up past bedtime and eat cookies. When Jackson was killed in the line of duty, Bastien took it upon himself to look after the Walker family. He drove the family to the funeral. Drake felt that even though they were "outsiders" in court, at least they had Bastien. Drake thinks of Bastien like an uncle. They have a deep special bond. Bastien is very loyal to Drake, which makes Drake very hurt by his role in the conspiracy against you. Eventually, Drake forgives Bastien for this.

Five years later, in The Royal Finale, Drake becomes upset and angry when Bastien confesses to having caused Jackson's death.

In The Royal Romance series, Drake mentions that Bastien was a junior agent under Jackson. However, in The Royal Finale, this changes and Bastien is said to be the lead agent with Jackson working as one of Bastien's best guards. Bastien says he taught Jackson everything about being a King's Guard.

In Chapter 13, Bastien states when he started working for the Via Imperii, Jackson discovered the group working to influence Cordonia. Jackson tells Bastien that he is a double agent, as he also joined the Via Imperii in an attempt to discover more about them and find a way to stop them. Jackson is angry that Bastien isn't also a double agent and Bastien explains that he believes working with the Via Imperii will protect Cordonians instead of resisting the Via Imperii's might. Jackson tries to persuade Bastien to go with him to infiltrate the Via Imperii's headquarters in Vallenheim, stating he also heard about their secret ward. When Bastien refuses to help Jackson, Jackson decides to go alone. Bastien tells The Eye about Jackson being a mole, and asks that they reassign Jackson. However, the Via Imperii stages an assassination attempt against Cordonia's royal family instead, killing Jackson in the process. 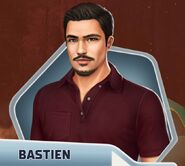 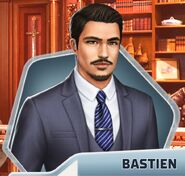