Choices: Stories You Play Wiki
Register
Don't have an account?
Sign In
Advertisement
in: Characters, Female, 'Most Wanted' Characters,
and 4 more

Ana De Luca, a character in the Most Wanted and The Royal Romance series, is a preeminent fashion designer and a journalist for a magazine called "Trend". She is first seen in Most Wanted, Book 1, Chapter 10.

Ana has short, blonde hair which she wears in a bob. She wears a gray pinstriped shirt with a white collar, a black blazer, gold hoop earrings and red rimmed shades.

She is very fashion forward but at times she tends to become aggressive. However, she is very friendly with Cassandra. She appreciates when people are straight forward and to the point.

Cassandra is acquainted with Ana.

Dave is acquainted with Ana. She seems to be quite fond of him, and describes him as "my beloved David" when Cassandra and Sam stop by the boutique before the L.A.R.A. gala. She explains that the two of them have a "quid pro quo," but that they don't have as close of a relationship as Dave and Cassandra.

At first, Ana treats Sam with scorn, describing her as a "down-home country mouse" and saying that Sam couldn't pull off wearing her designs. If you choose to buy one of her dresses, Ana takes a liking to Sam and asks her to become her muse. She apologizes to Sam and it's up to you to decide if Sam forgives her or not. If Sam forgives her, Ana will appear in Chapter 15 and shortly talk to Sam. If Sam doesn't forgive her or if you don't choose to buy one of her dresses, they will become rivals and Ana won't appear in Chapter 15.

As one of the reporters following Cordonia's royalty, nobility, and politics, she has followed Bertrand Beaumont and House Beaumont's story for years. In The Royal Romance, Book 1, if Your Character (The Royal Romance) decides to talk to her with Maxwell Beaumont, you find out that she knows that House Beaumont is broke. She says that Bertrand made House Beaumont important and catapulted the family name into the spotlight. She wants to publish a piece about House Beaumont being broke, believing that the public needs to know the truth and that they love a "riches to rags" story even more than a "rags to riches" story. Whatever you and Maxwell decide to say, you both convince her to hold off on publishing the article. 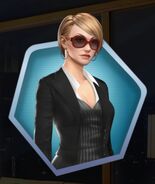 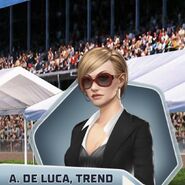 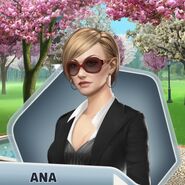 "Off the record" Ana