Choices: Stories You Play Wiki
Register
Don't have an account?
Sign In
Advertisement
in: Characters, Female, 'The Freshman' Characters,
and 7 more

The Freshman
The Sophomore
The Junior
The Senior

Abbie's hair is black and curly. She has brown eyes and tan skin. Usually, she wears a necklace and a white sweater with black symbols on it.

In The Sophomore, she wears a blue dress with flower prints.

Abbie is a nice, tactful girl. She enjoys painting, but she doesn't consider herself as an artist. Before she and Tyler got together, Abbie had never been in love or kissed anyone. That is possibly the reason why she sometimes behaves a little bit cautiously and has trouble with talking about her feelings.

The Freshman: Snowed In

The Freshman: Game of Love

Abbie is friendly towards Your Character and welcomes her with open arms during their first interaction in Chapter 1.

Abbie and Kaitlyn are usually shown to be good friends since the beginning. In Book 3, Abbie does not like how Kaitlyn is ignoring her friends, and hanging out with her new bandmates instead. After Kaitlyn apologizes, she and Abbie make up by the last few chapters. In The Sophomore, Book 1, when Tyler and Abbie's relationship goes downhill, Abbie ends up moving into Kaitlyn's room, much to Kaitlyn's dismay. In The Senior, Chapter 4, Abbie tells Kaitlyn in their girls night with Your Character that she has always seen her as a cross between Joan Jett, David Bowie, and either Tegan or Sara (who she can never remember who is who).

Abbie has a younger sister. In Book 1, it's mentioned that she just started high school and is having difficulties with her classmates. Abbie cares very much about her, so she wanted to fly to her sister immediately, but her parents wouldn't pay it.

In Book 1, Tyler developed strong feelings for Abbie. She later begins to return his feelings but both are unsure of how to initiate anything, with a number of misunderstandings and Leila's flirtations complicating the situation. If Your Character supports them, Tyler and Abbie will go to the formal together. In Book 2, they are an official couple and things seem to go pretty well. They share the same love for The Crown & The Flame series. In Chapter 15, they declare their love for each other and tell you that they want to do a cosplay together at PixelCon.

In The Sophomore, Book 1, it is shown that they have moved in together. In Chapter 6, she starts to appear to be frustrated with Tyler when Tyler shows affection towards her. By Chapter 13, their relationship seems to be more strained. Abbie ends up venting to Your Character about her relationship with Tyler and tells her that he never gives her any time to herself. Abbie also seems annoyed by his friendship with Sebastian. As of Chapter 14, they are taking a break from each other and Abbie is crashing on your couch to avoid him. In Book 2, Chapter 7, your character brought Tyler to the house to get them both talk and fix their relationship.

At first, Leila acts hostile towards Abbie due to the fact that she likes Tyler, too. 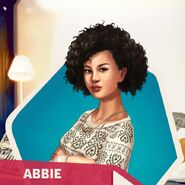 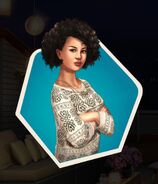 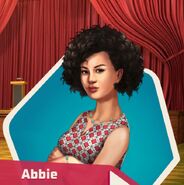 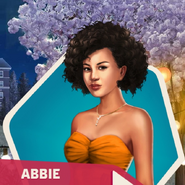 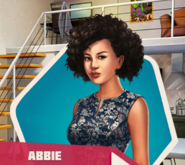 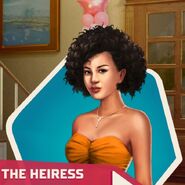 Abbie as The Heiress during the Murder Mystery Dinner 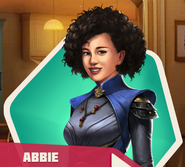 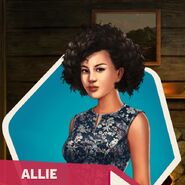 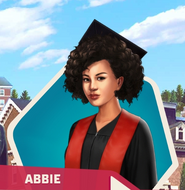 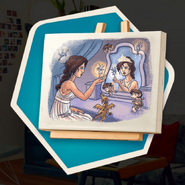 Abbie on the cover of The Sophomore, Book 2

Abbie talking about the musical influences she sees in Kaitlyn